Once you have assembled your Chooketeria place it on level ground. We advise a concrete paver or similar if it is to be used outside, on a grass or an uneven surface. Make sure the paver is wider than the width of the step or the lid will open too far and stay up.

Start training by holding the lid open and tightening the nuts on the sides. After a week, when they are used to feeding only from the Chooketeria, slacken the nuts so the lid moves freely. Place the peg supplied on the sides of the feeder box, as shown, so the lid is held half open. The chooks can see their food and soon learn that the step opens the lid.

Most get the idea in a week or so, however for slow learners lay a piece of light board from the step to the ground so when they step on it the lid opens slowly.

Initially place the Chooketeria close to the entrance of the coop so they have to step on it when going in and out. Be patient, they all get it in the end, most within a week or two but skittery hens (usually bantams) can take a lot more convincing.

To make sure they use the Chooketeria don’t put feed out anywhere else until they’re using it all the time. You can tempt your chooks by putting their favourite food in the feeder.

Chooketerias, being aluminium, require very little attention other than an occasional wash and a little light oil on moving parts. 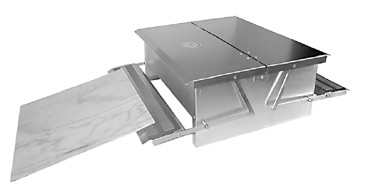